For eye certification we can arrange for a referral to a veterinary ophthalmologist.

We offer testing for this disease which, in some breeds, is a highly inheritable trait.  It is a bleeding disorder in which the blood does not clot well.  Von Willebrand’s disease is similar to hemophilia in humans and can result in life threatening bleeding.  Often dogs that carry this disease in their genetic makeup go undetected until an emergency situation arises during a routine procedure such as a spay or neuter.  In some cases, the disease may become apparent when a small superficial injury results in significant blood loss.  Knowing your dog’s condition ahead of time can make the difference between life and death.

Commonly affected breeds include Doberman Pinschers, Scottish Terriers, Manchester Terriers, Shetland Sheepdogs, Poodles and Pembrooke Welsh Corgis.  As many as 50% of Dobermans are affected with this disease.

Some animals show no signs of the disease but are carriers of the genetic problem.  If these dogs are allowed to reproduce, they can pass the disease on to their offspring.  If you are a breeder, consider using this test before breeding your dogs. 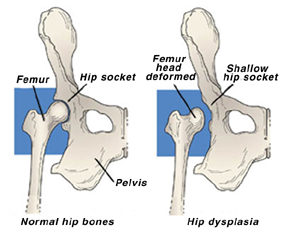 OFA (Orthopedic Foundation for Animals) Certification: We are able to radiograph your dog’s hips for hip dysplasia at 24 months of age.  We will send these radiographs to a Board Certified Radiologist for OFA certification.  Correct positioning of your dog is essential for proper radiographic evaluation, so a general anesthetic is sometimes required to make the procedure less stressful for him/her.

Dogs can be screened for hip dysplasia at an earlier age if desired, but cannot be certified until 24 months of age.

Outside of regular business hours, The Atlantic Veterinary College, located at 550 University Avenue in Charlottetown PE, sees all emergencies. If you are in need of urgent medical care for your pet, please call them directly at (902)566-0950.